THE SOUTH PETHERTON FOLK AND CRAFT FESTIVAL. A Festival since 1213.

It was in 1213 that King John confirmed a weekly market and an annual fair in South Petherton each Midsummer day, the Festival of St John the Baptist, although Midsummer day celebrations date from pre-Christian times and it is probable that these events had been held from Saxon days. In 1252 the Fair was extended to included the ‘eve and morrow’ and by 1294 was valued for toll purposes at 6s 8p (33p). The Fair’s value continued to grow and in 1448 it was extended again, this time to six days. By 1650 its value had begun to decline, reaching 6s 8p again by 1701.

When the Gregorian Calendar was introduced in 1752 (some people imagined that they had been deprived of eleven days of their life !) the Fair, like many others, kept to the old Midsummer day – July 5th and continued on this day until the 1930’s when such was the interest, or rather lack of it, that tolls were levied merely for the sake of tradition.

The Old Market House was demolished in 1843 and the replacement building can now be seen as part of the front section of the Blake Hall which was built in 1911.

It was against this background in 1977 that a group of South Petherton residents decided to revive the celebrations of old, gathering together musicians, dancers and craftsmen for a festival of traditional arts in and around South Petherton on the weekend (an ‘eve, day and morrow’) nearest to Midsummers day.

The Festival was a great success and went on to be held annually for 19 years, missing only one year – 1995, until 1997, growing steadily in size and scope until it achieved Countrywide fame and recognition.

However, its size and popularity worked against it and in 1997 it was decided that it had run its natural course.  It was greatly missed, and throughout the following years there were regular mutterings that it would be wonderful to resurrect the festival yet again, but on a more manageable and ‘local’ scale.  In August 2011, a meeting of interested parties was arranged and a committee set up.

The culmination of their efforts came about on Saturday 30th June 2012 when, once again, the village centre rang to the sounds of music, laughter and the merry jingling of Morris Dancer’s bells.

The full set of programmes for this event were discovered in a box when the David Hall was refurbished in 2009 and are now available for download in PDF form.

They make a fascinating read, not only because of the many and varied ‘names’ who came to perform at the Festival, but also the advertisements for businesses and people in the village who are now, sadly, no longer with us.

It is in the 1986 programme that the David Hall is included for the first time, when the then owner, Mr Brian Hall, permitted its use for the festival. 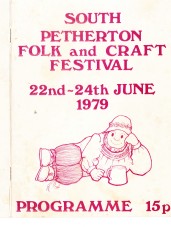